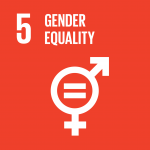 ACHIEVE GENDER EQUALITY AND EMPOWER ALL WOMEN AND GIRLS

The Human Rights of Women 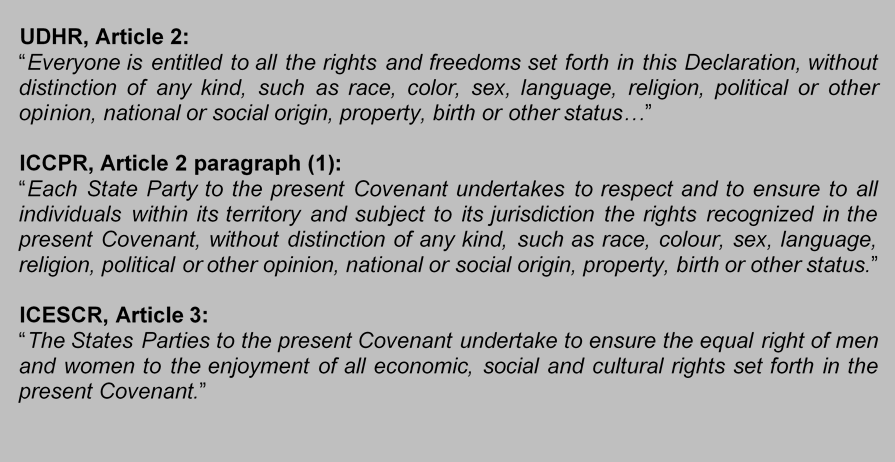 In 1979, the UN officially adopted a legal instrument specifically address the rights of women, namely the The Convention on the Elimination of All Forms of Discrimination against Women (CEDAW). The Convention elaborates the definition of sex-based discrimination as any difference in treatment on the grounds of sex which:

CEDAW tries to provide protection for women from discrimination in civil and political spheres, as well as in economic, social and cultural spheres. Moreover, it also lays the basis. It also species the obligation of State parties to eliminate discrimination, from adopting legislation prohibiting discrimination, refraining from discriminatory actions, to protecting women against discrimination by non-state actors both as an individual or organization/company.

While, at the domestic level, Indonesia has ratified the majority of the international human rights instruments containing prohibition against discrimination on the ground of sex, namely the ICCPR, ICESCR, CEDAW, CRC, CRPD and ICRMW, which means the GoI has the obligations to respect, protect and fulfill all the rights contained in the said instruments.

Furthermore, although the 1945 Constitution does not specifically prohibits sex/gender based discrimination, it prohibits discrimination on any grounds.[2] While, the Law number 39/1999 on Human Rights dedicates a special section on women’s rights, recognizing women’s rights as human rights (Article 45). Moreover, the human rights law also provides, inter alia, a guarantee for women’s representation in all governmental branches (Article 46), women’s right to education at all levels (Article 48), as well as women’s rights to work and at workplace (Article 49). Indonesia has  established a National Commission on Violence Against Women (Komnas Perempuan) as part of its national human rights institutions since 1998 and has also adopted a law on domestic violence since 2004.

However, despite the progress made in the legal sector at the national level, women are still facing discrimination in Indonesia. In 2016, Komnas Perempuan found that there are still 421 discriminatory bylaws against women remaining effective in various provinces, regencies and/or municipalities.[3] Domestic violence are still a threat to many women as a result of inadequacy in the law enforcement to hold proper investigations, prosecutions and convictions against perpetrators of domestic violence. Data showed that in 2014, there are 293.220 cases of violence against women recorded by Komnas Perempuan, and 68% of them were domestic violence cases.[4]

Furthermore, Indonesia is listed as a major source country of trafficking in persons (TIP) and women/girls are among the majority of the victims of sex trafficking. IoM reported to have assisted, at least, 7,193 victims of trafficking between the years of 2005-2014.[5] As to violence against girls,  according to a finding from UNICEF, Indonesia is among the countries with the highest prevalence of FGM, where half of girls under the age of 11 years are circumcised.[6]

There are nine global targets set out under the Goal 5 on gender equality and women/girls empowerment and among them, the GoI found almost all targets, except for target 5b on the use of technology in women empowerment, are in line with the national medium-term development plan (RPJMN) 2015-2019.[1]

As both international and national law in Indonesia recognize women’s rights as human rights thus, it is an obligation for the GoI to not only adopt legislations and policies prohibiting discrimination, but also to refrain itself from facilitating discrimination against women. Therefore, it is important to take or optimize the measure to provide an ample legal protection for women by, among others, revoking any legislations, policies and bylaws discriminating women both at the national and local levels, including provinces, regencies and municipalities. While, to optimize the national effort to promote equality, it is also important to prioritize the adoption of the Gender Equality Bill, which is aimed at providing a legal umbrella for the prevention of gender discrimination.

Sexual violence, as well as domestic violence, remains a threat for women. According to Komnas Perempuan, on average there are 3.000 to 6.500 sexual violence cases against women annually.[1] It is, in fact, the second highest violence against women in domestic sphere, while the first one is physical violence. Therefore, it is important for the GoI to prioritize a legal framework to protect women from sexual violence by, among others, adopting the Elimination of Sexual Violence Bill. Moreover, as the practice of FGM is also widespread in Indonesia, it is also important for the GoI to adopt the SDGs global target to eliminate this harmful practice against women and girls (Target 5.3).

Furthermore, as it was mentioned earlier, the high number of cases of violence against women is contributed by the lack of adequacy in law enforcement, which has created the culture of impunity for the perpetrators. Therefore, it is important for the GoI also monitor the progress in the law enforcement with regard to providing adequate investigation, prosecution and conviction to perpetrators of violence against women.

Indonesia has just recently produced a data source for estimating the baseline of violence against women indicators. Through the National Women’s Life Experience Survey (2016 SPHPN), indictors 5.2.1 and 5.2.2 could be estimated. UNFPA has provided technical assistance to MOWE-CP and BPS in the preparation, the conduct, analysis and the final survey reporting. On FGM indicator 5.3.2. the Government has indicated on the need to obtain more evidence, including valid and relevant data to measure the SDGs FGM indicator in Indonesia.

Proportion of women aged 15-49 years who make their own informed decisions regarding sexual relations, contraceptive use and reproductive health care.

In 70 countries this data is covered by DHS data disaggregated by age, location, economic quintile, education, marital status and disability. However, the metadata shows that the data covered by DHS is only on women’s own health care, not specifically regarding sexual relations, contraceptive and reproductive health care. UNFPA will follow up this issue with ICF International that provide technical support to the global Demographic and Health Survey to address the need to include informed decisions regarding sexual relations, contraceptive use, and reproductive health care, instead of women’s own health care only.

While women’s leadership in politics, including their participation in high political and governmental offices, are important in the promotion of gender equality, women’s participation in political leadership in Indonesia remained low. According to data from Komnas Perempuan in 2015, there were only 7.48% women candidates for local government leadership (governor, regent or mayor positions), while the rest, 92.52%, were men. To this end, it is necessary to include an indicator on the proportion of women holding those jobs.

As to land ownership, discriminatory traditional practices, with regard to inheritance, combined with lack of information and awareness of both the public and registration officers about the option of joint registration has contributed to the low joint ownership of land among married couples, who mostly registered their lands on behalf their husbands’ names. According to a report by the UN Special Rapporteur on Adequate Housing, 65% of new titles are issued in the names of men and 30% in the names of women.[1] Therefore, it should also be a priority for the government to optimize its effort to promote gender equality in land ownership.

In light of the gaps in the indicators under Goal 5 of the SDGs, we would like to propose the following additional indicators to strengthen the impacts of the national development strategy to achieve gender equality and empower all women and girls.
The UN country team can support the GoI to achieve its targets on achieving gender equality and  and empower all women and girls by providing technical assistance, especially from UNICEF and UN Women, to assist the GoI in developing policies to optimize legal protection for women from discrimination and violence.

UNFPA is working extensively with the Government and the civil societies on the issues of gender based violence, including the prevention of violence against women and girls particularly among vulnerable groups such as unmarried young people, women and girls affected by disasters as well as key population. In addition, UNFPA is also supporting the Government of Indonesia to address harmful practices, namely child marriage and FGM. In this connection, UNFPA is providing assistance (technical support to survey and studies) for evidence-based policy development and programme interventions for VAW prevention and response as well as the elimination of harmful practices.